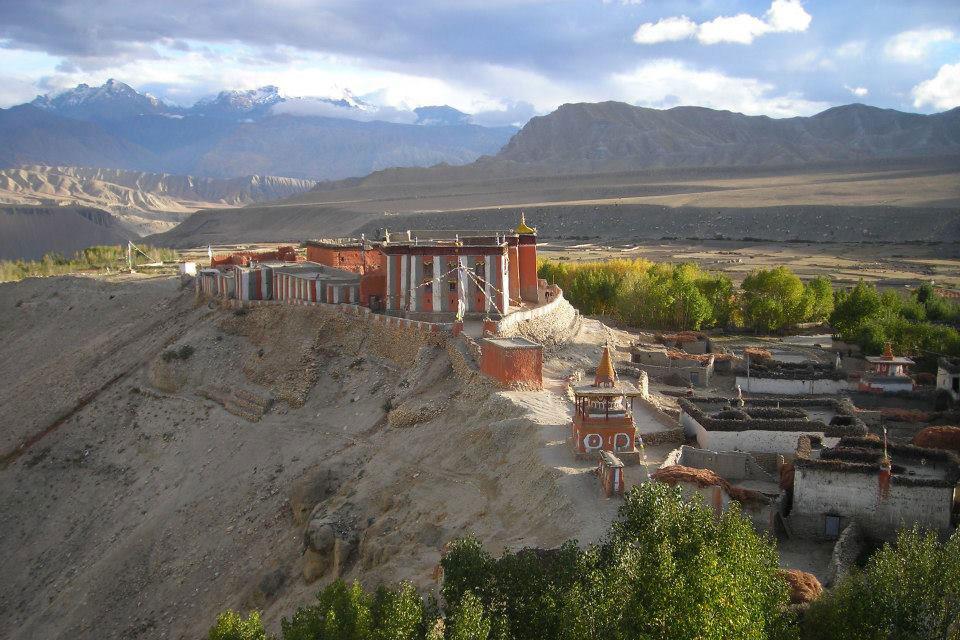 off the beaten trails lead to the most beautiful of places. That is exactly what I, Govinda Panta, MD of Adventure Pilgrims Trekking felt while tekking to the forbidden kingdom of upper Mustang.I visited Mustang for the first time in July,1993 as a porter. Here is the experience when i last travelled to upper Mustang amongst many times.With every mile I passed through the rugged terrain, I couldn’t help but feel that I was a part of an adventurous game–a game I could win by crossing the finish line and lose by parting with my life.

As I looked below, the narrow road sent a shiver down my spine and the tall hills above on which winding snake-like roads nonchalantly crisscrossed made my heart pound every time we approached a narrow bend. Fear crept in and faded away throughout the journey. But that did not stop me from wanting stop in front of the small streams and waterfalls we passed by. Our track ahead felt like it had been paved by a bolt of lightning.

But as I was there to enjoy a part of Nepal I already had visited, we know once is not enough! I suppressed my fear and decided to take it all in. As soon as I stopped being afraid,it always has me astonished, I feel that this part of the land is indeed one of Nepal’s true gems, a place that hasn’t been marketed enough.

Upper Mustang is a place that is rich in culture, natural beauty and history. I am so elated by its beauty that a part of me didn’t want to leave.

Due to its remoteness and the absence of natural resources, upper Mustang remained in the shadow until 1992 when it was first opened for tourism and it is still a Restricted Area. As soon as tourists started coming to this place, It developed at a brisk pace and its cultural and economic landscape evolved.

The ‘timeless place’ that somehow escaped the wrath of development was a place where the peoples still nurtured a close relationship with the land. It still is a place that is both pristine and primitive, and thus beautiful. Upper Mustang has been overly mystified in one too many travel journals.

This area didn’t have roads before 1992, and if you look at the paths closely, they aren’t actually roads. That these tracks do exist nowadays is a great thing because over these years the area has seen a rise in domestic tourism–something the people of the place hadn’t dreamed of in the mid-90s.

Parts of the road that leads to upper Mustang aren’t the best, for example, the stretch between Chusang, Samar and Bhenka Danda is in a miserable state.

Roads from Jomson take you up to the China border in Korala but they aren’t the best as construction works are continuously going on. The most beautiful breathe taking part of the trip was crossing the Kali Gandaki River, which during the monsoon isn’t the easiest thing to do. But a bridge is being built here too.

Locals are hopeful that when the the roads get better, more tourists will come. Adventure Pilgrims Trekking has been taking groups of foreigners to upper Mustang.The place is ideal for those who love adventure because these roads aren’t for the faint-hearted.

I think personally, For tourism to get better in the region, the Korala border should be opened What I feel missing in the region is adequate information. The information available isn’t enough and tourists won’t know the importance of the place. There are a lot of monuments around the region which have both cultural and historical significance but without proper information, no one will know about them. There are some who don’t even the reach the place. so, travelling here with Adventure Pilgrims Trekking will be beneficial as you wont be missing any of Upper Mustang.

Upper Mustang is one of the best-kept secrets of the Himalayas. One that hasn’t had many travellers. Although the region has attracted adventurers from all over the world, there’s still plenty of mystery left.